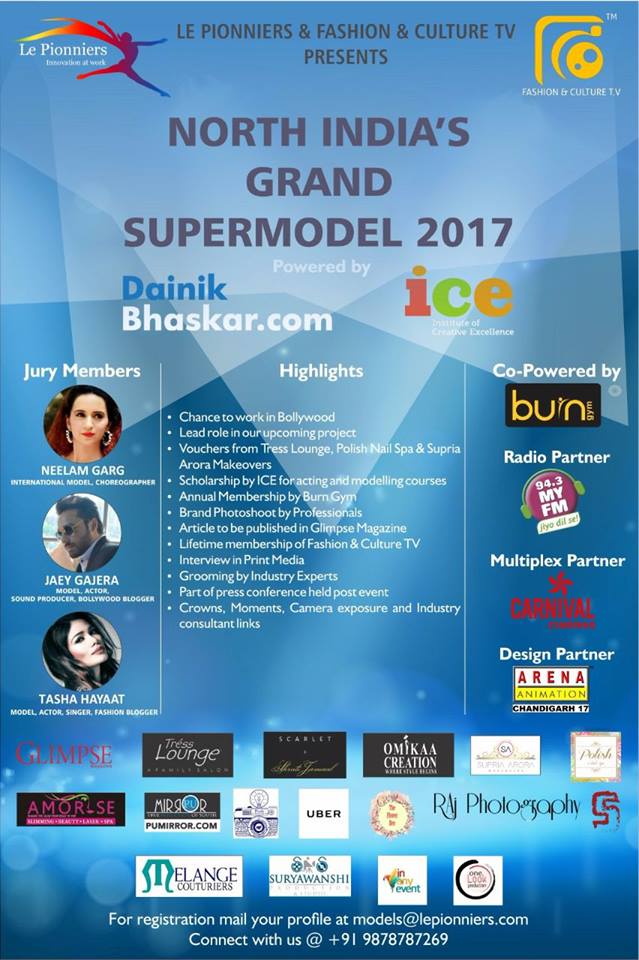 North India’s Grand Supermodel 2017, organized by Le Pionniers, turned to be a glamorous affair at the North Country Mall, Kharar on August 19th. It kick-started at 8:00 PM, to pave the way for young budding models to the Bollywood industry.

Sahil Sethi, the CEO of the company said, “It gives us great joy to help others realize their dreams, but often they lose hope due to the dirty game of the glamorous industry. We are here to take that pain and pave an easy way for our budding talent.” He further added that the recent graduates from NIIFT Ludhiana had designed the dresses worn by the candidates and concluded, “If we are onto a project we are fully on it covering every aspect of it, as goes for this fashion talent show we would like to give a platform to every deserving talent.”

The panel of judges saw two international models- Neelam Garg, who also being a choreographer has bagged many awards under her name and Ruby Singh, who is an actress and winner of many beauty pageants. The other judges comprised of Ritu Dogra (Model, Actresses, Professional Groomer), Shruti Jamaal (Fashion designer,owner of the brand- Scarlet) and Vineet Raj Kapoor (Delegate Head for India in Ace Fair Festival South Korea, Dean of Chitkara University).

There were in all 25 candidates which were selected from 1000s of entries. The candidates further had to go through 3 rounds- the ethnic round, western round and the fusion round. Their performance in each round was assessed and calculated and the candidates with the highest scores were awarded a breath-taking trophy and a certificate and an acting scholarship by I.C.E (which is an acting institute by Ekta Kapoor).

Neelam Garg concluded on the note praising the organizers and the committee and said that we further need such platforms for the young talents so that they can take calculated risk and further fulfil their dreams and ambitions.

There were also some questions asked from the crowd and the winner was awarded a Raj Photograph 50% off bumper prize and a local onlooker also left the crowd in awe with his mellow voice by singing a classical Panjabi song. The event surely did change the life of many.