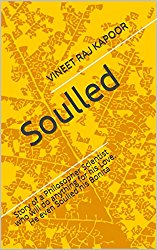 Soulled - Story of a Philosopher Scientist who will do anything for his Love. He even Soulled his Bonita.

Soulled: Story of a Philosopher Scientist who will do anything for his Love. He even Soulled his Bonita

This is dedicated to all those people who don’t care about money. Who don’t give in to the power of the owned world.

This is my Autography. Yes you heard that right. Autography is not an Autobiography. I am not just yet writing an epitaph to myself, but just a graphical account of my life. As it happened. With dialogues. I used to be a simple scientist, and my only love was conducting experiments. My life used to be full of fumes, boiling liquids, sinister sounds, and POOF, some noisy explosions. In short, my life was Hell, and I was having Hell of a Time.

Like usual, I was taking measurement, pouring liquids, watching fumes, boiling, visually scanning the liquid for effects. taking measurements. signing! Oh did I write signing? My pen, the h at times remains short and looks like n. I actually sigh a lot, and wish for a life that dumb people live. Now, I did have a girlfriend like others, actually many (I am not sure now). Let’s go back a little in time.

Soulled: Story of a Philosopher Scientist by Vineet Raj Kapoor 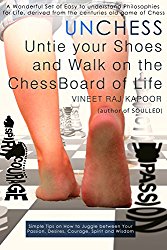 UnChess - Untie Your Shoes and Walk on the ChessBoard of Life